The North Carolina economy is expected to continue the slow growth pattern of the past eight years, UNC Charlotte professor says.

In 2017, the North Carolina economy is expected to increase by an inflation-adjusted rate of 2.4 percent over the 2016 level, said UNC Charlotte economist John Connaughton during the Mid-Year Economic Update at The Ritz-Carlton, Charlotte.

Connaughton said there are several positive economic indicators that could continue into the foreseeable future, including the pattern of growth, low unemployment and strong consumer confidence.

“We are in the eighth consecutive year of positive economic growth for the North Carolina economy. We are entering the second-longest economic expansion on record. Yet the size of the economic growth has been somewhat lacking, not able to achieve an average 3.0 percent real GDP growth rate that had been fairly consistent since WWII,” Connaughton said.

Connaughton also said employment trends look positive into the future. Seasonally adjusted nonagricultural employment in North Carolina is expected to reach 4.4 million people in December 2017, an increase of 1.7 percent over the employment level in December 2016.  The state is expected to gain 75,200 net jobs during the year. The sectors with the strongest expected employment increases in 2017 are construction at 5.5 percent, other services at 4.2 percent, and hospitality and leisure services at 3.3 percent.

Consumer confidence is another positive indicator of the economy, Connaughton says. “During the third and fourth quarters of 2016, both North Carolina and the U.S. economy began to expand at a rapid rate. The mixed signals that had been putting a damper on the economy during the first half of the year began to sort themselves out. Consumer confidence began to rise and by December 2016 the index stood at 113.3, the highest level since the Great Recession began,” he said. Yet, Connaughton stressed that consumer confidence can change and should be monitored closely.

Connaughton added that productivity growth is lacking. Connaughton said North Carolina’s labor productivity has been flat, indicating that the growth in state GDP has originated from labor force growth. “Over the last five years, North Carolina’s labor productivity has actually declined by an annual average of 0.68 percent. This means that all of the growth we have experienced during the past few years has come from labor force growth. This has come in the form of the unemployed becoming employed again and people migrating to North Carolina. The recent changes in these trends suggest that we face a challenge pushing long-term inflation-adjusted GDP growth above the 2.0 percent level in the future,” Connaughton said.

Connaughton presented his quarterly forecast as part of the Mid-Year Economic Update organized by the Charlotte Business Journal, Barings and the UNC Charlotte Belk College of Business. 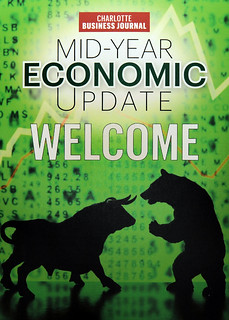 View photos from the Economic Update